Which is the better, Valentine’s Day or Pancake Day?

Which is the better, Valentine’s Day or Pancake Day? Valentines as we all know falls on February 14th and in 2020 – it’s a Friday.

Pancake Day always falls on Shrove Tuesday which is 47 days before Easter. Easter in 2020 is Sunday 12th April. Therefore, Shrove Tuesday 2020 is on 25th February 2020

So, what’s the background?

Let’s look at Valentine’s Day first. The day gets its name from a famous saint, but there are several stories of who he was. The popular belief about St Valentine is that he was a priest from Rome in the third century AD. Emperor Claudius II had banned marriage because he thought married men were bad soldiers. Valentine felt this was unfair, so he broke the rules and arranged marriages in secret.

When Claudius found out, Valentine was thrown in jail and sentenced to death. There, he fell in love with the jailer’s daughter and before he was taken to be killed on 14th February, he sent her a love letter signed “from your Valentine”.

Did you know that in the Philippines, February 14th. is by far the most popular day to get married on, with mass weddings of hundreds of couples being commonplace.

Formal messages, or valentines appeared in the 1500s, and by the late 1700s commercially printed cards were being used. Valentines commonly depict Cupid, the Roman god of love, along with hearts, traditionally the seat of emotion. Traditional gifts include chocolate and flowers, and in particular red roses – as a symbol of beauty and love.

Pancake Day, or Shrove Tuesday, is the traditional feast day before the start of Lent on Ash Wednesday. Lent – the 40 days leading up to Easter – was traditionally a time of fasting and on Shrove Tuesday, Anglo-Saxon Christians went to confession and were “shriven” (absolved from their sins). A bell would be rung to call people to confession. This came to be called the “Pancake Bell” and is still rung today.

This was the last opportunity to use up eggs and fats before embarking on the fast and pancakes are the perfect way of using up these ingredients. The ingredients for pancakes were also seen to symbolise four points of significance at this time of year; Eggs – Creation, Flour -The staff of life, Salt – Wholesomeness and Milk – Purity.

In the UK, pancake races form an important part of the Shrove Tuesday celebrations – an opportunity for large numbers of people, often in fancy dress, to race down streets tossing pancakes. The object of the race is to get to the finishing line first, carrying a frying pan with a cooked pancake in it and flipping the pancake as you run. 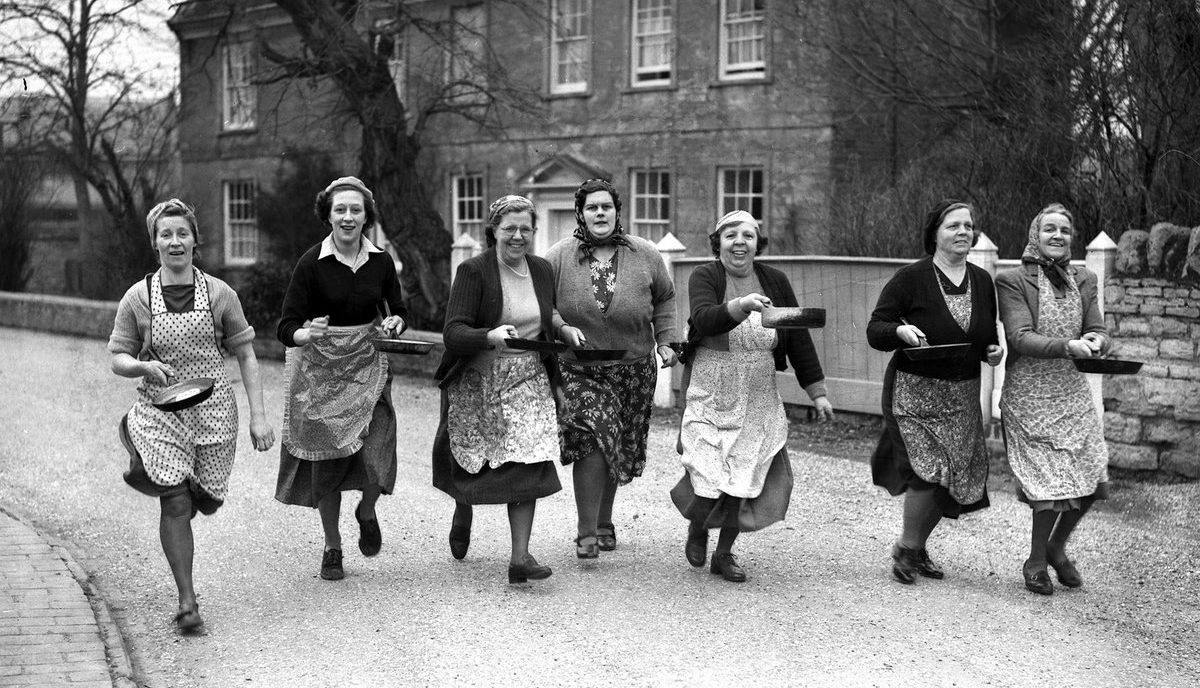 The most famous pancake race takes place at Olney in Buckinghamshire. According to tradition, in 1445 a woman of Olney heard the shriving bell while she was making pancakes and ran to the church in her apron, still clutching her frying pan. The Olney pancake race is now world famous. Competitors have to be local housewives and they must wear an apron and a hat or scarf. Each contestant has a frying pan containing a hot pancake. She must toss it three times during the race. The first woman to complete the course and arrive at the church, serve her pancake to the bell-ringer and be kissed by him, is the winner.

Suggesting there is a battle between Valentine’s Day and Pancake Day is a little preposterous – to say the least.

They celebrate quite different things. Love for a sweetheart or Love for a flat cake. In many people’s hearts, love and pancakes will always inseparably connected.

Both are not great for the waistline. One year we go straight from stuffing our faces with pancakes, to doing the exact same thing with heart-shaped chocolates and visa-versa the following year.

Let’s look at the pro’s and con’s of each day.

Some more observations and conclusions between the two.

So, whatever you prefer, have a good one and if you’re lucky have a great time on both occasions.